Over the last decade, journalists have held up Germany’s renewables energy transition, the Energiewende, as an environmental model for the world.

“Many poor countries, once intent on building coal-fired power plants to bring electricity to their people, are discussing whether they might leapfrog the fossil age and build clean grids from the outset,” thanks to the Energiewende, wrote a New York Times reporter in 2014.

END_OF_DOCUMENT_TOKEN_TO_BE_REPLACED

YOU WOULD THINK that after decades of analyzing and fighting email spam, there’d be a fix by now for the internet’s oldest hustle—the Nigerian Prince scam. There’s generally more awareness that a West African noble demanding $1,000 in order to send you millions is a scam, but the underlying logic of these “pay a little, get a lot” schemes, also known as 419 fraud, still ensnares a ton of people. In fact, groups of fraudsters in Nigeria continue to make millions off of these classic cons. And they haven’t just refined the techniques and expanded their targets—they’ve gained minor celebrity status for doing it.

On Thursday, the security firm Crowdstrike published detailed findings on Nigerian confraternities, cultish gangs that engage in various criminal activities and have steadily evolved email fraud into a reliable cash cow. The groups, like the notorious Black Axe syndicate, have mastered the creation of compelling and credible-looking fraud emails. Crowdstrike notes that the groups aren’t very regimented or technically sophisticated, but flexibility and camaraderie still allow them to develop powerful scams.

“These guys are more like a crew from the mafia back in the day,” says Adam Meyers, Crowdstrike’s vice president of intelligence. “Once you’re in an organization and are initiated, then you have a new name that’s assigned to you. They’ve got their own music, their own language even. And there are pictures on social media where they’re flaunting what they’re doing. The whole idea is why invest hundreds of thousands of dollars to build your own malware when you can just convince someone to do something stupid?” 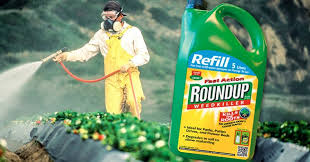 A California man dying of cancer will soon become the first person ever to take agrochemical giant Monsanto to trial over allegations that the company has concealed findings that glyphosate, the active ingredient in the company’s popular weedkiller Roundup, causes cancer.

Before DeWayne Johnson, a 46-year-old father of three, was diagnosed with non-Hodgkin lymphoma at the age of 42, he worked for a school district in California, “where his responsibilities included direct application of Roundup and RangerPro, another Monsanto glyphosate product, to school properties,” according to his “landmark” lawsuit.